By the end of October 2020 the Moorhouse array had generated  10,212 MWh of electricity and saved over 5,357 tonnes of CO2 since it started operating in April 2015. This is 4% above predicted despite dull months in February, March, September, and October 2017, a 5 day panel outage in June 2018 and a dull June in 2019. The drop in performance during early 2019 was due to unavoidable works by Western Power Distribution which necessitated the relocation of some of the panels, resulting in reduced performance over that time. This loss was estimated to be around 80MWh which, for comparison, would have resulted in a further 1% improvement in performance above forecast.

The Moorhouse Lane Solar Array is our first local community energy generation scheme. It consists of  7,176 solar panels and will produce enough electricity for around 500 homes. It cost just over £2 million pounds which was raised through a community share offer in 2014. The project has been fully operational since April 2015. The chart below shows the monthly generation against predicted output since commissioning.

Solar farms provide excellent opportunities for enhancing biodiversity. We have contracted with Wild Service, the wildlife consultancy for the Avon Wildlife Trust, to manage the habitats at Moorhouse Lane.

Prior to the development of the Solar Array at Moorhouse Lane the site was composed of four fields of improved grassland with a network of hedgerows, rhines and ditches.  The south eastern most field was classified as a SNCI and included areas of vegetation representative of marshy grassland.  The act of constructing the Solar Array caused sufficient disturbance to the grassland sward and soil to allow a slightly more diverse sward to develop.  There has been an increase in damp grassland species such as hairy sedge (Carex hirta), false fox sedge (Carex otrubae) and meadowsweet (Filipendula ulmaria).

Through on-going management and monitoring work the ecological resource provided by the Site will continue to increase with the development of a mosaic of species-rich damp grassland and tussock forming grassland areas set within a sensitively managed network of hedgerows and ditches.  This habitat mosaic will support a wider range of plants and create an array of niches and micro habitats which will in turn increase the biodiversity value of the Site.

Two grass cuts have been carried out this year and the Trust is monitoring the plants and other biodiversity on the site before arriving at a final management regime. This will be in line with the ecological management and maintenance plan that was an accepted planning condition for the project. As there will be a relative lack of human activity on the site after it is built, it is expected that wildflower and wildlife populations will thrive and the biodiversity of site become enhanced.

The sun shone on Saturday 9 May 2015 as George Ferguson, the Mayor of Bristol, formally launched our first solar project at Moorhouse Lane in front of 150 members and guests. 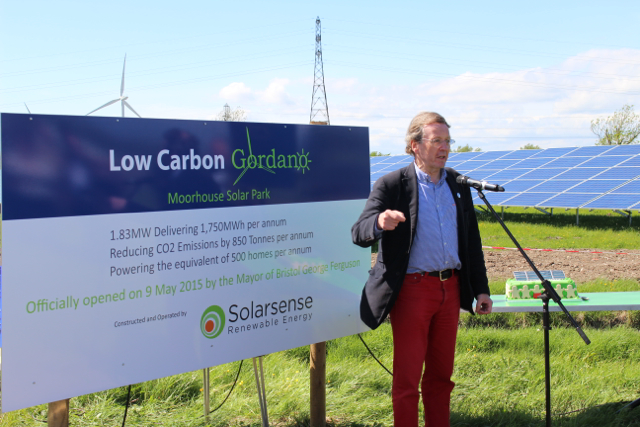 George Ferguson speaking at the launch of the Moorhouse array 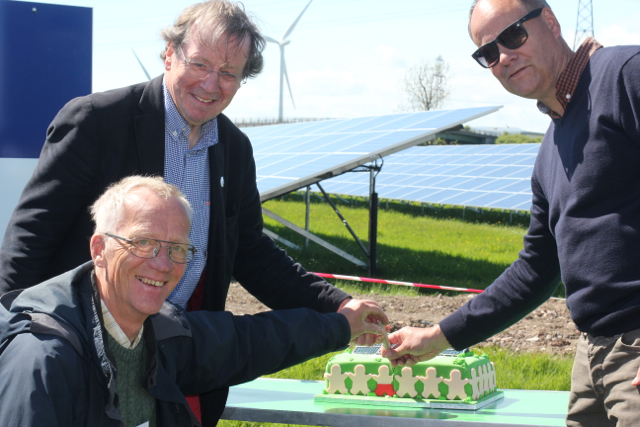 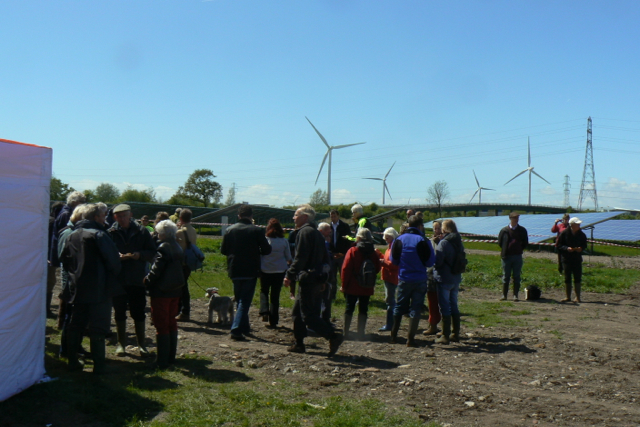 Members and guests at the launch

The plant has been fully operational since mid-April producing more than 1.3 million kWh of electricity to-date, and saving over 690 tonnes of CO2 by displacing coal and gas-fired electricity.

The total investment required was just over £2million which was raised through a community share offer in summer 2014.

The projected annual output is 1,750 MWh – enough to supply the annual electricity demand for 500 houses with an estimated saving of 850 tonnes of CO2 per year.

Low Carbon Gordano (LCG) owns the Moorhouse installation and has a 25-year lease agreement with the landowner. LCG will receive payments under the feed in tariff (FIT) scheme and income from the export of electricity to the national grid.

The project is being managed in partnership with Mongoose Energy (more about Mongoose). The directors of both companies have a track record in energy generation, successful business management and community involvement.  The share offer was administered by Ethex (more about Ethex), experts in ethical investment.

One of our energy saving initiatives is EASY - Energy Saving Advice for You offering impartial energy advice to householders in the Gordano communities.

As part of this EASY service we offer home energy quick checks and thermal images of homes which can show where heat is escaping.  If you would like to find out more please email us.

"As European Green Capital 2015, we are delighted to be associated with Low Carbon Gordano's ambitious plan to build Bristol’s first large scale, community owned, solar array – the biggest of its type in the country. It is a great opportunity for citizens of Bristol and others to invest in our future, with the prospect of a healthy financial return."