Jon GethingPosted on 19/08/2016 Posted in Uncategorized

This newsletter contains details of the AGM in September, the proposed interest rate for this year, and news about the first tranche of projects funded through the Community Benefit Fund as well as the regular update on our projects.

We are delighted that Keith Barnham, Emeritus Professor of Physics at Imperial College, and author of “The Burning Answer” will be our guest speaker at the AGM on 27th September.

His talk is entitled, “How soon can we achieve an all-renewable electricity supply in Gordano?”

Keith started his career as a particle physicist but has spent the last twenty years or so researching into solar photovoltaics. He is convinced that the future lies in solar PV  and he questions the wisdom of current energy policy in the UK which he says is being dictated by the fossil fuel and nuclear lobbies.

This year the AGM will be held in the 6th form lecture theatre at Gordano School in Portishead and Keith will be giving his talk at 7:15pm. Afterwards he will have copies of his book available at half price.

Interest Rate and Community Benefit for 2015/16

At the Board Meeting held on 28 July, the Directors considered the financial projections for Low Carbon Gordano  in order to agree on a recommendation to the AGM in September.

The share offer documents which raised over £3 million for the construction on our Moorhouse and Ham Farm solar arrays presented investors with a return of 7%, being 4% above long-term RPI. Our financial forecasts, set out in the document, envisaged inflation remaining at or close to 3% and energy-price inflation at 1% above that. These assumptions, linked as they were both to lengthy historical trends and official government forecasts, seemed soundly based at the time.

In fact, of course, the situation has changed radically in the meantime. Around the world, economies are struggling and inflationary pressures are very low. Energy prices have dropped dramatically, partly because of demand being lower than anticipated, partly because of the determination of major oil-producing nations to maintain high outputs, and, ironically, partly because of the huge recent expansion of renewable energy sources. (China, for example, has now installed so much solar and wind power that it has reduced its use of coal, many years before even recent predictions.)

In consequence, our expectations of future income from our schemes have had to be significantly reduced. Instead of Feed-in Tariff increases of around 3% per year (in line with anticipated RPI) an annual increase of 1-2% or lower seems much more probable. Also, instead of the price we receive for exported energy increasing by about 4% from a base of around 6p/kWh we are actually receiving only the rate guaranteed by the FiT scheme, currently 4.91p/kWh, also rising with RPI. All of this is partly offset by the schemes performing significantly better than predicted.

The Board also considered the company’s commitment to community benefit, which is a key element in our rules. This year we gave £25,000 to the community benefit fund of which 10% went to an outstanding project in Madagascar: the remainder has been awarded to 7 local schemes which promise both good carbon reductions and excellent community benefits. (See separate item in this newsletter.)

The result was that, whilst the Board recognised that it would be possible to pay members’ interest of 7% this year, this is not sustainable in the medium term unless conditions change significantly and unexpectedly. It would leave the company exposed to any further downturn in conditions and make it impossible to put any money into the community benefit fund. It would threaten our ability to pursue further projects which we believe are very important to our long-term well being. The Board therefore agreed unanimously to recommend to the AGM that members’ interest payments are made at 5.5% (being 4% above current RPI) and that a further £25,000 is donated to the community benefit fund.

We recognise that this may be disappointing to some, but we hope and expect that the majority of members will understand the circumstances. The Board believes that at a time when returns on many investments are close to zero the proposal remains a good deal for investors, whilst maintaining the community benefit aspect of our work and a sound approach to the company’s future.

We will, of course, be pleased to hear members’ views both at and ahead of the AGM.

The Committee was delighted with the range and quality of the schemes being supported.  It is estimated that collectively they will save over 50MWh of energy every year, with annual savings in excess of 12 tonnes of carbon dioxide.

The schemes being supported are very varied – Gordano School is being helped to install LED lighting and increase plastic recycling in the school; the Long Ashton Growers will be setting up new polytunnels and planting a wide range of fruit bushes; ReMission, a Clevedon organisation that supports recovering addicts, is being helped to completely upgrade their heating system (with potentially major carbon savings); Pill and Easton-in-Gordano Parish Council are getting funds to accelerate their programme to convert the village street-lights to LEDs; the Scouts in the same village will also now be able to install LEDs in their hut; and finally, Ambition Lawrence Weston, representing the community close to our Moorhouse array, are going to train local, currently unemployed, people as energy advisers to help householders and businesses use energy more efficiently, and are working with local companies to ensure that there will be employment opportunities for the trainees after the project.

More information on the fund can be found HERE. 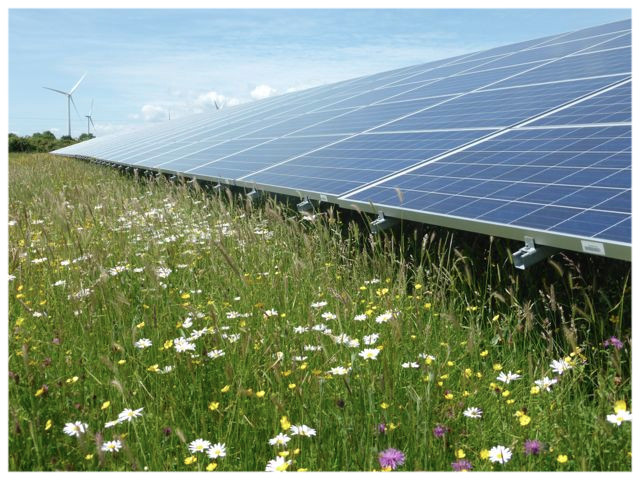 The Moorhouse array has now been generating continuously for 16 months. By the end of July it had generated just over 2.7 million kWh of electricity and saved more than 1,400 tonnes of CO2. Despite a distinctly cloudy June, overall it has been operating above the expected output by around 6.9%.
Click here for more about Moorhouse 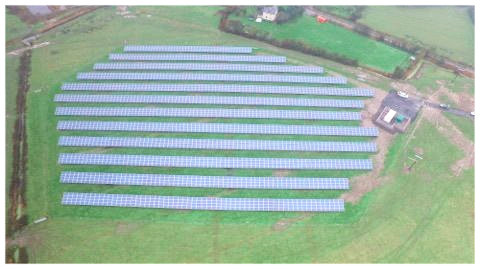 The Ham Lane array has been in operation for 8 complete months and is demonstrating even better performance than Moorhouse. Since commissioning it has generated 675 MWh of electricity making a saving of 354 tonnes of CO2. Overall it has performed nearly 11% above expected. Click here for more about Ham Lane. 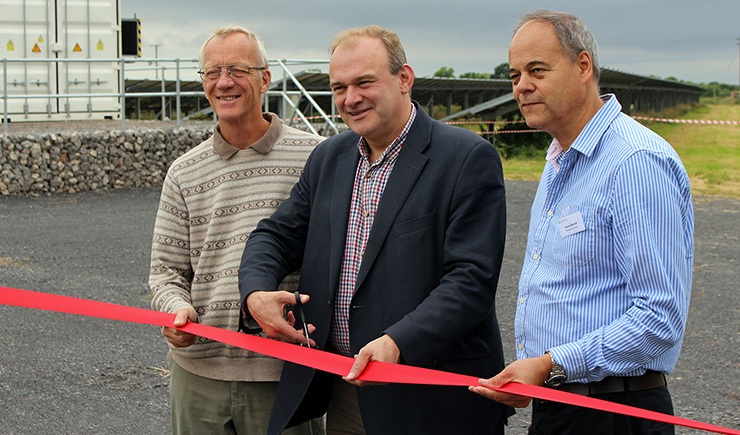 The three roof projects at Clevedon YMCA, and at Church House and Northleaze School in Long Ashton have been in operation since the beginning of the year and are all performing well and saving money for their buildings as well as carbon. By the end of July the three schemes had generated 40,500 kWh of electricity and saved 21.2 tonnes of CO2. Click here for more on the roof projects 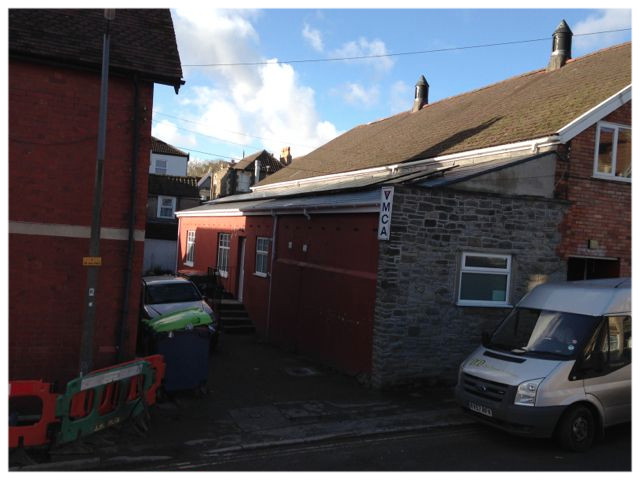 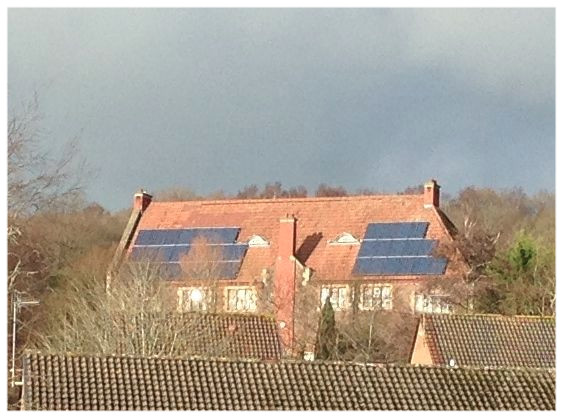 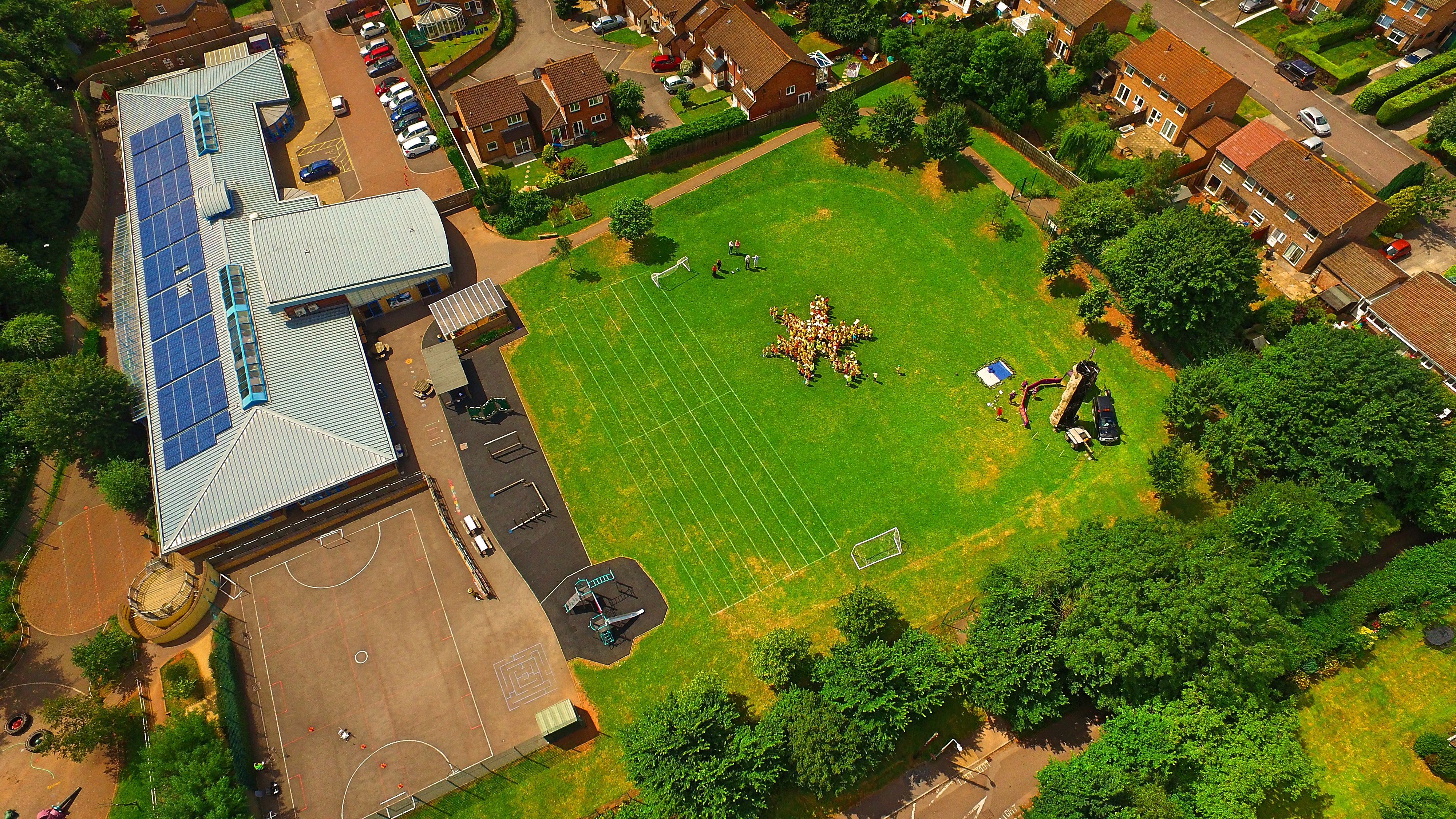 The children at Northleaze celebrated their new solar panels by forming a giant sun. You can see an aerial video of the Northleaze School celebration HERE